The 5050-type LED strips are pretty cheap, and can (sometimes) be controlled by ESP32’s fairly easily. The rough idea is to connect the individual color pins to a NPN transistor and to control them with an ESP32 PWM output pin. 5050 LED strips are always set to the same color, you can’t control them individually. There are different voltages of strips available - we’re using 5V since they seem to be pretty cheap, and they can just be powered by a USB cable.

The basic idea is to use an output pin to control a signal, which will let more or less electricity flow. The electricity will flow through the LED strip and light a color appropriately. Do this for 3 colors and you have everything covered.

On the ESP32 you don’t change the voltage of the pin directly (which would be an analog output – though some ESPs have that), but rather you change how often it’s turned on & off, effectively making it appear to be a different level. Technically you don’t change how often, but rather which percent of the time the signal is on (& appropriately which percent it’s off). This is called pulse-width-modulation (PWM). Most of the smaller microcontrollers have some form of this available by design, you can also do it manually with code that turns the output on & off, but it’s not really needed.

The ESP32 outputs can’t send enough electricity to directly power the LEDs, so we use the output to control a transistor, which does it for us. It looks roughly like this, for each color: 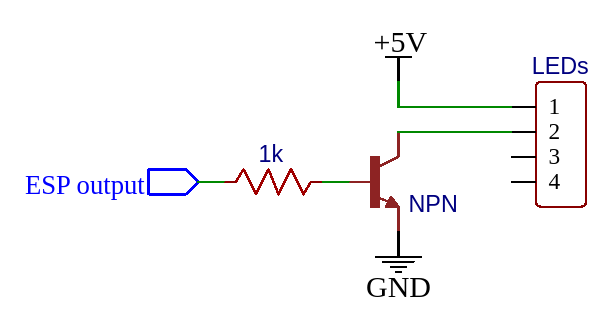 Let’s walk through what happens here. The LED box on the right is where you connect the LED strip. The strip takes a +5V input, runs it through the LEDs, and returns it for Red, Green, Blue separately. If you let the electricity flow to ground, the LED lights. If you don’t let it flow, it stays off. The NPN transistor lets the flow of the electricity to ground, if there is some signal on the “base” (the middle line). With the ESP output, through a 1k Ohm resistor, we give a signal to the “base” of the transistor, letting the electricity flow. The NPN transistor type lets it flow when the signal is there; a PNP type would let it flow except when a signal is there. (A PNP would theoretically work too, but it would result in the LEDs being lit when your device is turned off, which is kinda weird, and you’d have to unplug it to turn it all off.)

To control the LEDs, we’ll use WLED, which is a cool wifi-based LED controller. It’s made for individually controllable LEDs, but it works for 5050 LEDs too. Because we’re using WLED, we’re going to have to use specific pins on the ESP32, namely: outputs 5, 12, & 15. If you’re making your own software, you can use pretty much any pin that you like. If you want to modify WLED, you can change the pins too.

Here’s what the full circuit would look like with these pins:

A simple breadboard version of this could look like this:

If you plan on keeping this, obviously make it tidier :-).

WLED is an awesome project to control strips of LED lights via wifi. The initial setup is kinda tricky, but once you have it on your ESP, you’re ready to rock & roll.

To use 5050 LED strips, you’re going to have to compile WLED yourself. That sounds trickier than it is, hopefully. You should be familiar with the command line & code editors to do this. You don’t really need to know how to code.

Open a terminal window and use “git” to clone it to your local drive.

There’s a brief guide for this in the WLED wiki.

… in platformio.ini add a semicolon to comment out the existing “default_envs” line, as mentioned in the WLED wiki.  (This lets us select a build environment)

… in the same platformio.ini file, remove the semicolon from the “default_envs” line that mentions “esp32dev”. (This selects the generic ESP32 setup)

Now you can connect to your device and try it out. To do so:

Click on “Config” (top menu), “WiFi setup”, and add the network name & password there. Make note of the name mentioned in the mDNS section, that’s the name you can use in a browser. Mine is “http://wled-fa3124.local” for example.