2007-08-07
Google
Warning: This page is pretty old and was imported from another website. Take any content here with a grain of salt.

I always wonder about a statistic, I call them Drive-by-posters. Those who come in and make a post, only to be never heard of again, even though their questions may be answered.

Let’s take a quick look at who posts in the groups (how long they’ve been active), who starts new threads and a short dissection of what first-time posters do on the group and how they evolve from there.

I split the posters of the Google Webmaster Help groups into 4 rough categories:

So where do the posts come from?

I put together a chart with the number of posts per week split among the before-mentioned groups. 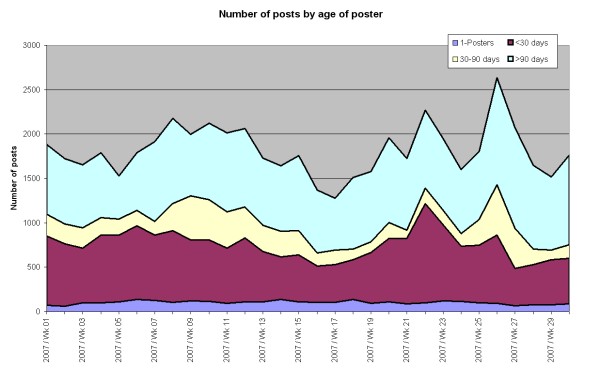 As you can see, regular users post (on average) a bit more than half of the posts in the groups.

Where do the threads come from?

Posts themselves can mean many things - they could be initial postings with questions or ideas (new threads) or the could be replies to other postings. Let’s take a look who starts new threads (again, per week). 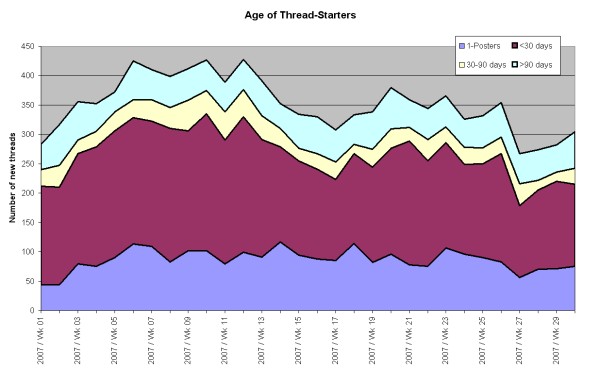 Looking at this chart, it’s clear that the largest part of all new threads are started by new users - including a fairly large group of users who start a new thread but never return to it (or at least, never reply to it and never start another thread). Why don’t they reply? Why don’t they stay to interact?

What do first-time posters do?

Let’s take a look at only the first post that a user makes. Do they reply to an existing thread or rather start their own? How many of the first time posters (new users) stick around, are retained by the groups and either reply to their thread or add a comment (or more) elsewhere? 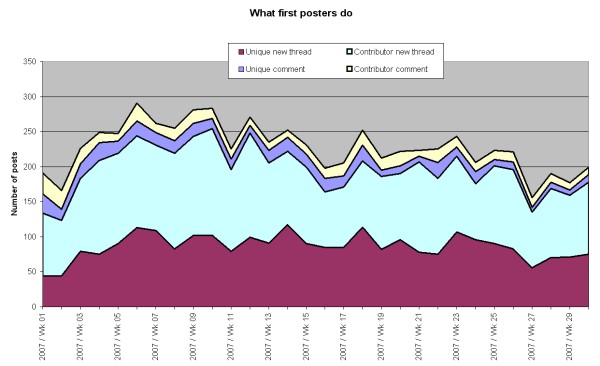 Here we see that a bit less than half of the new users only make a single post, never to return again. It’s rare that the first post is a comment in a different thread - usually it’s the start of a new thread.

Almost half of the new users abandon the groups after their first post.

Why would they do that? How could more users be motivated to interact more - or are those first posts so irrelevant that they shouldn’t be there at all?

What do you think?

Warning: This page is pretty old and was imported from another website. Take any content here with a grain of salt.