Embedding tweets with the usual setup is a bit annoying. You end up using Twitter’s JavaScript, which takes a while to render the content. You probably have to do the GDPR dance for your users too (I honestly don’t know the details), since it’s possible they include cookies / trackers, etc.

I made a “simpler” version which uses a preprocessor and Hugo Shortcodes to embed tweets as images. It’s easy to use while writing, the preprocessor generates images using Chrome / Puppeteer as needed. The images are hosted in the site’s static directory, and use whatever optimizations you have in place. The image includes a rough fetch timestamp to give a sense of when it was taken (regarding reactions, etc). 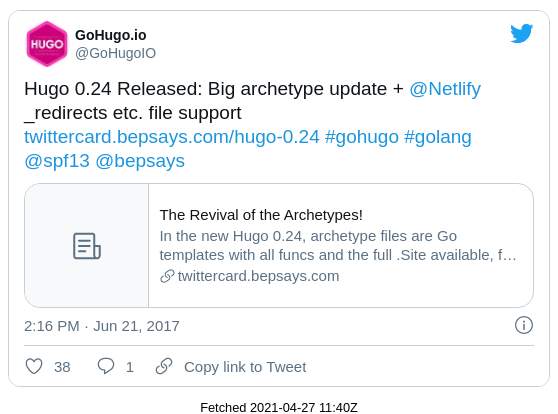 Full code is on Github.

This won’t work on my site here, because the content security policy is pretty strict, so it’s kinda awkward to show:

Refused to load the script ‘https://platform.twitter.com/widgets.js’ because it violates the following Content Security Policy directive: “script-src https://cdnjs.cloudflare.com ‘unsafe-inline’”. Note that ‘script-src-elem’ was not explicitly set, so ‘script-src’ is used as a fallback.